been pretty busy lately nerdling for the 1st week of school i must say, as i made a commitment, its time sticking to it :)

a week in sherry's life has been rathaa emotional surprisingly, for a nerdtron? lmao. started english and maths tutoring which increased mi workload, by 100. :( though im having it with steffi and andy. lmao, going to school seems pretty much meaningless..
it seems though im isolated from reality, mainly cos of mr.unknown, social life and the others which i cant be bothering thinking about.
its hard thoo.. well for me to multitask, chat on msn, do ur homework, socialise with friends, all in a day.. good example: i ought to be finishing my homework thas due in tomoz but instead ive decided to blog? there u goo..

and u just feel like letting all ur emotions out, but unfortunately noone would listen. they'll eventually get bored and its pointless going on ab ur emotions cos they've got theirs too..

so why not put it all on paper? 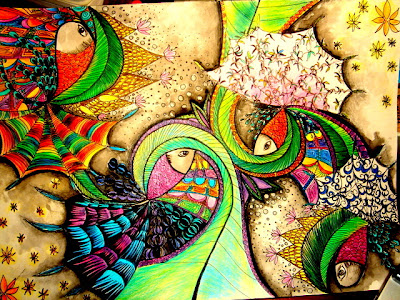 fishes are simply beautiful to look at, however each day they die from pollution before our very eyes.


~treasure every second
& every day
-editted-
my mind's playing tricks on me again, one second i miss him, and the next i dont. why is it so difficult to forget about someone? im startin to understand why he wud ratha not talk to me than just be friends. but not talking to each other, isnt making things easier eitha. the whole situation wouldve been less awkward if we stopped ignoring each other. i dono, someone tell me, someone start giving me advices, cos ignoring him aint helping. i mean, my life seems perfect atm, i've got friends who cares. laughing giggling at school cudnt feel any better, but knowin that his around the corner took my attention more than any other...
life's pretty much a blurr to me when it comes to love, yes i'm in no position to talk about love at my age.. but this is different, this is NOT just about love, but friendship.it's tough enough to accept the fact that we're not friends anymore but the awkwardness faced in school all day is way beyond anything imaginable. *sarcastic much?*
nope.
just picture your bestfriend walk passed without even saying hi *on purpose*, and ur too afraid to even look at him in the eye... but after he's 100miles away.. you can't help but turn back and see if he's still there...
or worse, bumping into someone who was once friends with u and just because of that person in particular, everyone eventually looks at you differently.. knowing that they've been talking ab you but pretending that u've got no idea wotevaa's going on..
& this feels no different than having your hopes crushed
Posted by Sherry Ng at 10:06 PM
Labels: Art, Struggles