What's a make up accesory you can't live without? Definately my concealer.
I've been using a couple of different kinds of concealer in the past year perhaps? From wax-based concealer, cream-to-powder concealer, and liquid concealer. In my opinion, as long as your concealer's able to conceal your flaws, that concealer definately deserves a tick. (: As mummy left for New Zealand yesterday, taking her Body Shop Skin Protecting Concealer with her.. I was sadly left with well.. no concealer. Although I had the ones which I bought months ago, those were eiwy stuff.. and mummy's always seems better than the ones I'll ever get. (Hers=expensive, expensive= Good Quality) (: A logic which everyone understands... 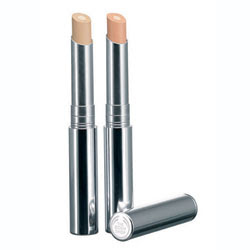 enriched with baobab oil, naturally rich in vitamins and moisturising agents to care for your skin and zinc oxide to help combat impurities.
(Looked it up on google, No it's not available in Australia, mummy bought it for rm 50, which after converted would be AUD19.82)
This is Good because baobab oil prevents dryness and wrinkles, and protects against chapping, This natural oil is also rich in vitamins A, D, E, F. 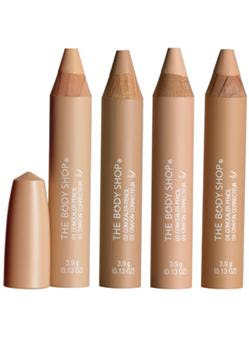 A range of luxuriously creamy, lightweight, wax-based concealer pencils that blends easily to effectively cover blemishes and conceal redness.
I personally recommend this concealer only for blemishes, as I applied in on my undereye once(which is pretty much the only area that needs concealing) The texture of wax-based concealer is heaps thicker than cream concealer, slightly uncomfortable/unnatural.)
Aud 20.95
Last but not least, the liquid concealer. (oh my gosh on this one) I tried looking it up on google.. and couldn't find any images of this specific concealer. Is this concealer really that unknown seeing as it's neither on msn, google, or yahoo? I have come to the conclusion that the World Wide Web does not know EVERYTHING afterall. (:
This concealer, which I bought at the end of last year; A decision I made purely out of cheapskateness. Walked into the pharmacy, and into the make-up section... There were a heap of varieties to choose from, Revlon, L'oreal, Maybelline, Covergirl, and Model's Prefer. Revlon and the others are pretty well-known for reasonable make-up prices but Model's Prefer? that's something new. Pulled it out of the box, finding for the price tag. umm.. is AUD8.90 cheap for a concealer? I thought for a second. Pulled out the others aswell, compared prices.. (like a normal china-girl would) Asked for assistance from the pharmacist..
Which area do you normally conceal?
My eyes.
Hence she picked out the Model's Prefer concealer, given that it's the cheapest concealer amongst the others I was gripping in my hand. Had another 5 minute consideration alone.. You know...Do I need this? Don't I already have one back home? Why is it sooo cheap?
Accidently left it here when I went back in Malaysia, bought the bodyshop wax-based counseller instead, came back to Australia and haven't used it eversince. Till now...

Picture taken from my walk in Jells Park.

My Aud8.90 concealer deserves a tick too!

you skipped school again on a friday you noob... XD

the cream concealer is good for eyes to actually. cos its thicker in formula so its better for oily skin. Just that u need a good base like eye cream before u put that on so that u dont feel that its too thick or heavy!
:)

we shud do a review together gether! btw.. feel so sad cos everyone is having fun in NZ and im stuck here.

Hanley- I was extremely sick this morning, like couldn't get up for anything. It's currently 7.oopm atm.. and I just woke up.
yes.. that's how sick i am.

You're sick? Oh dearie me!
What happened to the carrot soup?!?!
Now, you need chicken soup =)

I was probs food poisoned from it!
lol
joking.
yeh
still am
hmm..
Doubt I'll be going to school tomorrow.